"Date of Death" is the thirteenth episode of the second season, and the 19th episode overall of the post-apocalyptic horror television series Fear the Walking Dead, which aired on AMC on September 25, 2016.

The next morning, survivors who had seen the hotel's lights come on begin to flock to the hotel gates, but the hotel survivors refuse to let them enter. Madison then spots Travis among the crowd and lets him inside. Back in the past, Travis begins to treat the wounded tourist James' wounded leg and buries the dead farmer. That night, Travis tries to warn Chris not to associate with the tourists, but Chris rebuffs him. One week later, the tourists decide to leave for San Diego in spite of Travis' warnings that the city has been burned to the ground. However, James still hasn't fully recovered and cannot be moved. Fearing that James will be murdered by the others, Travis steals Chris' gun in an effort to protect him. James then tells Travis that he and his friends made a pact to ensure none of them would turn, and he was the one who mercy killed a fourth member of their group. He believes his friends, who think he's dying, will kill him under the misguided belief that it will be a mercy killing as well. Chris arrives to deliver food, but it turns out to be a trick when the other two tourists ambush Travis and execute James. Travis tries one last time to convince Chris to come with him, but Chris leaves with the remaining two tourists. Back in the present, Travis laments to Madison how he failed to take care of Chris, and regrets that he never told him he loved him before parting ways. Madison then talks with Alicia and reveals to her that her father's car crash was not accidental, but suicide and reiterates her love for her. Afterwards, Madison sees that the survivor group at the start of the episode have been allowed into the hotel compound, with them being checked to see if they're healthy or sick. Later that night, a new group of survivors arrive at the hotel, among them the two tourists. 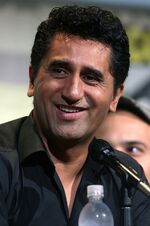 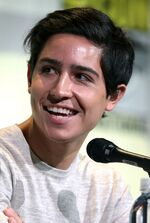 Although the episode's overall reception has received mixed reviews, Travis Manawa's (Cliff Curtis) and Chris Manawa's (Lorenzo James Henrie) relationship during this episode was met with high praise from critics.

"Date of Death" received mixed reviews from critics, although Travis' and Chris' story arc was met with high praise. On Rotten Tomatoes, it garnered a 67% rating, with an average score of 5.95/10 based on 12 reviews. The site consensus currently reads, ""Date of Death" doesn't advance the season's arc much, but the story—and the relationship between two key characters—remains strong."[1]

Matt Fowler of IGN gave "Date of Death" an 8/10.0 rating, stating; "Fear the Walking Dead turned its focus back to Travis and Chris and gave us a great story about a father trying his best to save his son from turning into a dudebro zompocalypse goon. It didn't work, and Chris went his own way, but the storyline helped elevate Travis even further, showing us the actual value in his ideals."[2]

"Date of Death" was seen by 3.49 million viewers in the United States on its original air date, below the previous episodes rating of 3.62 million.[3][4]