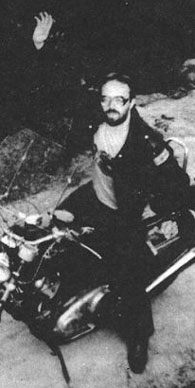 David Anthony Kraft (born 1952),[1] also credited simply as David Kraft, is an American comic book writer, publisher, and critic. He is primarily known for his long-running journal of interviews and criticism, Comics Interview.

Before his comics career, Kraft worked as a rock and roll journalist.[2] In September 1976, he became editor of FOOM with issue #15,[3] Marvel's self-produced fan magazine, lasting as editor until the magazine's final issue (#22) in the fall of 1978.[4]

Known for his offbeat approach, Kraft first made a name for himself as a comic book author with his work on Marvel Comics' The Defenders,[5] particularly the 1977 "Scorpio Saga" story-arc (issues No. 46, 48–50).[6] In The Defenders, Kraft wrestled with large philosophical issues: the temptations of power, the Cold War and nuclear power, sibling rivalry, and growing old alone. Kraft also merged his interests in music and comics by inserting multiple references to the band Blue Öyster Cult into his Defenders stories specifically the "Xenogenesis: Day of the Demons" storyline, issues #58–60.[7] Kraft combined music and comics in his scripting of the Marvel Super Special No. 4 featuring The Beatles.[2]

Kraft wrote the entire run, except the first issue, of Savage She-Hulk, which ran from 1980–1982. He had stints on such titles as Captain America and Creatures on the Loose. He scripted the first story drawn by John Byrne for Marvel Comics: "Dark Asylum," published in Giant-Size Dracula No. 5 (June 1975).[8]

In the early to mid-1980s Kraft wrote children's storybooks featuring Marvel characters like Spider-Man, the Incredible Hulk, and the Fantastic Four for the Children's Press, Marvel Books and Simon & Schuster.[2] During this same time he wrote the interactive game books Ghost Knights of Camelot for Avon, and Robot Race for Scholastic books. In 1983–1984, Kraft wrote World's Finest Comics for DC Comics. After that, Kraft did occasional comics writing, but mostly focused his energies on publishing and criticism. In 1995, Kraft worked as story-editor and scripter for the short-lived animated series G.I. Joe Extreme. Kraft is the co-writer and editor of Yi Soon Shin: Warrior and Defender by Onrie Kompan Productions, LLC.

Fictioneer and its imprint Comics Interview Group also published magazines like David Anthony Kraft's Comics Interview, trade journals like Comics Revue, and the trade text 100 Hot Tips from Top Comics Creators (1994). In early 1985 Comics Interview Group branched out into comic books by taking on Henry and Audrey Vogel's Southern Knights (previously a self-published series). In 1986 they expanded their comics lineup with MICRA and Aristocratic Xtraterrestrial Time-Traveling Thieves, and began publishing a number of Southern Knights reprints in the form of graphic novels, one-shots, and limited series. Though 1988 saw them also introduce Julie Woodcock and Brian Stelfreeze's CyCops, none of their comics publications sold as well as Southern Knights, and by the end of 1988 they had stopped publishing any other titles. In mid-1989 Southern Knights was canceled as well, and the Comics Interview imprint was again devoted solely to magazines and trade publications (though in 1992 they would co-publish Southern Knights No. 35 and 36).

In 1983, Kraft founded David Anthony Kraft's Comics Interview, with ran for 150 issues[9] between 1983 and 1995,[10] and garnered Eisner and Eagle Award nominations. As suggested by the title, each issue of Comics Interview was filled entirely with in-depth creator interviews.

Since 1974, Kraft has been the literary agent for the estate of pulp author Otis Adelbert Kline.

Retrieved from "https://heykidscomics.fandom.com/wiki/David_Anthony_Kraft?oldid=1545581"
Community content is available under CC-BY-SA unless otherwise noted.