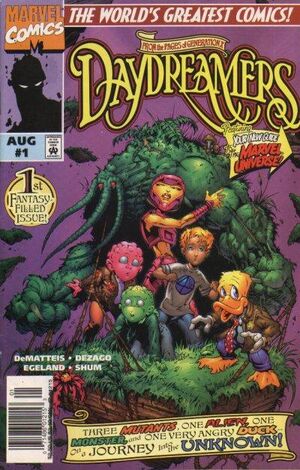 My family prob'ly thinks I'm dead...although considering what a bunch of dysfunctional losers they are, that ain't such a bad thing...

Appearing in "Once Upon a Time"Edit

Other Characters: The following characters appear as fantasy representations only:

Synopsis for "Once Upon a Time"Edit

Previously:
Black Tom Cassidy invaded the Xavier Institute for Higher Learning in search of his brother, Banshee. In the Bio-Sphere, Howard the Duck attempted to get Franklin Richards, Artie Maddicks, Leech and Tana Nile to safety by the quickest route possible – the Nexus of All Realities. As luck would have it, the Man-Thing was nearby and the kids dived into the creature's mucky physique, entering the Nexus.

Now:
Franklin and the gang are sailing through the inter-dimensional byways of the Nexus floating on a broken chunk of Earth. No one can really understand what is happening to them and Howard begins to have a panic attack. Tana keeps his attitude in check, and reminds him that their first responsibility is to look after the children. Artie falls asleep and projects a vision of his nightmare – a vision involving a dark, menacing shadowy figure.

Before long, these Daydreamers arrive in a surreal fantasy world known as Nevernever-Narnozbia. Their earthen sled lands atop a woman (who looks suspiciously a lot like the Scarlet Witch) known as the Red Witch of the Southeast, squashing her flat. A bunch of rocky little Things run out to greet the visitors expressing their happiness that the witch is finally dead.

Suddenly a man in drag named Strange arrives and thanks them for saving Nevernever-Narnozbia from the threat of the witch. Franklin expresses his desire to return home and Strange uses the Eyeliner of Agamatto to direct them towards the King of the realm.

Meanwhile, Howard the Duck gets separated from the group and comes upon a magic lamp. Rubbing the lamp, he summons a green goblin-like genie who grants him three wishes. Howard wishes for a way out of this mess, and the genie provides him with a Desoto. Driving along in the antique car, he eventually meets back up with his friends – only to become prisoners of the King.

The King bears a strong resemblance to Doctor Doom – an old foe of the Fantastic Four. The Daydreamers try to escape and a fight breaks out in the King's throne-room. The dark spectral figure from Artie's vision arrives and declares that he has come for Franklin Richards.

Retrieved from "https://heykidscomics.fandom.com/wiki/Daydreamers_Vol_1_1?oldid=1422954"
Community content is available under CC-BY-SA unless otherwise noted.