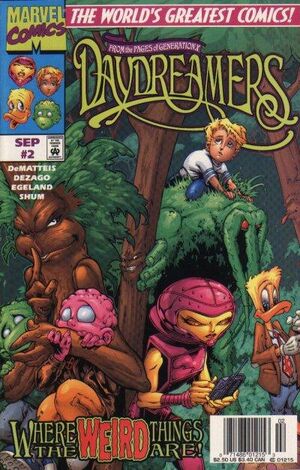 Appearing in "Across the Universe"Edit

Synopsis for "Across the Universe"Edit

The Dark Hunter attacks the Daydreamers proclaiming that he has come for Franklin Richards. The Daydreamers cannot decide which is stranger: The evil villain standing before them, Doctor Strange in drag, or the fact that the Man-Thing can suddenly carry a conversation. Leech tries to siphon away the Dark Hunter's powers, but to no effect. Franklin asks Strange if he can send them home. Strange cannot send them back to Earth, but instead uses his magic wand to send them to another realm altogether.

The group arrives in a bizarre cartoon-liked reality, which appears as if it were crafted from the mind of Doctor Seuss. Weird creatures are seen walking down the streets with distended lips and large tufts of hair on their heads. Like the characters from Doctor Seuss, everyone has a penchant for speaking in rhyme.

The Daydreamers stop at a local diner to collect their thoughts. The staff at the diner becomes irate with Howard, who refuses to speak in rhyme. Franklin placates the offended food servers, but ordering their meals in rhyme for them. It does little good however as the Cadence Police arrive to arrest the Daydreamers. Howard wants to start a fight with them, but Tana convinces him that allowing them to be taken to jail might actually serve their better interests.

Suddenly, Artie begins to distrust Franklin. He continues to have visions of the Dark Hunter and feels that Franklin is connected to the Hunter in an unhealthy fashion. Franklin lashes out at him, declaring that he should mind his own business.

Later that night, the Dark Hunter comes for them. Tana Nile rips the bars off of their prison cell and they break free. She tries to keep the Dark Hunter at bay, but is unable to penetrate his shadowy form. Howard tries to get the Man-Thing to transport them back home, but the Man-Thing explains to him that he cannot control the power of the Nexus. Regardless, the Daydreamers dive into his slimy muck and access the Nexus of All Realities.

When they exit, they find themselves on Duckworld – the planet of Howard's birth. They look around in shock and awe as they see a large bronze statue of Howard the Duck in the town square. To all accounts, Howard appears to be a hero of the people.

Retrieved from "https://heykidscomics.fandom.com/wiki/Daydreamers_Vol_1_2?oldid=1422955"
Community content is available under CC-BY-SA unless otherwise noted.