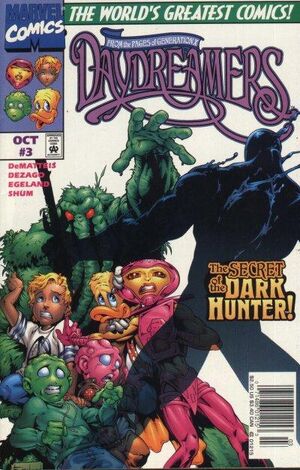 Great! From the end of reality t' the middle of nowhere!

The Daydreamers are amazed to find themselves on Duckworld – the home of Howard the Duck. Crowds of people begin swelling around the new arrivals, eager to welcome their hero home. In an effort to keep the excited mob at bay, Tana Nile picks up the Man-Thing and begins swinging him about like a baseball bat.

The Daydreamers duck down an alleyway and stealthily make their way towards Howard's home. Howard does not know why he is being hailed as a great hero, and he frankly doesn't care. The Man-Thing begins to lose his cohesion, and Tana has to help him along.

They arrive at the house of Howard's parents, June and Ward. It is an idyllic two-story home with a perfectly manicured lawn and a white picket fence. June and Ward come out to greet the newcomers and they welcome Howard with open arms. Following a quick repast, Howard decides that he has had enough. He knows that this is not his true family and that his home life was never this perfect. As he shakes his head in denial, the imagery washes away and all is revealed to be an illusion.

Meanwhile, the Man-Thing continues to fall apart. Tapping into the cosmic energies of the Nexus of All Realities has proven too taxing for his physical form and he can no longer maintain his cohesion.

Before long, the Dark Hunter arrives on Duckworld and continues his pursuit of Franklin Richards. The Daydreamers leave Howard's faux household and proceed to a place known as the Richards Institute. Inside are two-dimensional cartoon versions of Franklin's parents, Reed and Susan Richards.

The Dark Hunter tracks them down and they soon realize what the Hunter actually is – he is the living embodiment of Franklin Richard's repressed emotions. When the Daydreamers first interacted with the Nexus of All Realities, it reacted with Franklin's dormant mutant powers, creating a conduit into a pocket dimension inside Franklin's subconscious mind.

Franklin never came to terms with the fact that his parents are gone – victims of the villain known as Onslaught. In his grief, he fabricated an imaginary, illusory world where he could effectively hide from his pain. Now having confronted his own fears in the form of the Dark Hunter, Franklin is finally ready to let go of his parents.

As Franklin's pocket reality ceases to exist, the Daydreamers exit the Nexus of All Realities. They are back on Earth in the Florida Everglades, and the Man-Thing is back to his normal, inarticulate self.

Retrieved from "https://heykidscomics.fandom.com/wiki/Daydreamers_Vol_1_3?oldid=1521029"
Community content is available under CC-BY-SA unless otherwise noted.