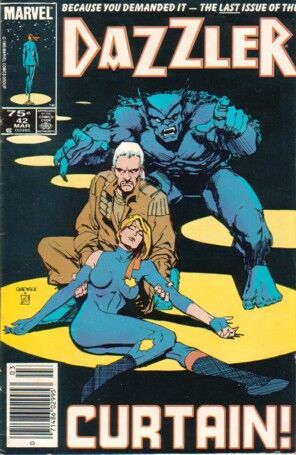 In a police questioning room Arthur Alan Smith is being questioned by two police officers about his involvement at Camp Silence, all he can admit is that he "saved Dazzler"....

The night previous, O.Z. Chase, having teamed up with Dazzler's old lover the Beast have tracked her down to the deserted mansion on the Camp Silence compound. There they are attacked by the Outriders Chunk and Mama, and with the help of Cerberus, they defeat the two attackers. Meanwhile, Silence has relocated the New Wave and Alison to the now-abandoned laboratory where the drug that gave the New Wave their powers was invented. Silence has been using her muting powers to prevent Dazzler from absorbing sound and converting it into light energy. In order to insure Dazzler's obedience in using her light powers to empower the New Wave members, she shows that Alison's mother Katherine has not only been kidnapped but injected with the same drug and in order to prevent her mothers demise she must do their bidding.

Dazzler agrees and begins using her light powers to energize the New Wave members. Among their numbers is obsessed Dazzler fan Arthur Alan Smith (who used his powers of becoming invisible to all to escape prison), a member of the New Wave himself and incredibly concerned when Dazzler faints from over taxing her powers. As Dazzler is taken away to rest up for her next session, Arthur decides to use the gun he lifted from the prison as a final alternative to save his beloved singer.

During Dazzler's next performance, one that will surely kill her if she channels all her power to the members of the New Wave, Dazzler betrays them and fires a concentrated blast into her mother curing Katherine of the drugs effects. At that moment O.Z. Chase and Beast crash the factor and comes to Dazzler's rescue. They arrive to see Dazzler and Silence in a struggle together, Silence using her powers to try and stifle Dazzler's light powers. In a gamble, Dazzler decides to instead of channel light to let out the sound that she absorbed, this results Dazzler to unleash a sonic scream that causes Silence to wither away and die.

Just as the heroes think the battle is won, Dust reveals that he's been inhabiting the body of a member of the New Wave, a girl named Portia and threatens to possess her mothers body just like her fathers. Not wishing to lose another family member Dazzler attacks Dust. During the fight Arthur Alan Smith pulls out his gun and shoots Dust dead. With the compound crumbling the heroes manage to make their escape. Dazzler decides that she must go underground, and everyone present agrees to tell the authorities that the body of Portia (who resembles Dazzler) is really her and Smith, finding the seclusion of prison better than the outside world agrees to take the wrap and return to jail. After bidding farewell to her mother and O.Z. Chase, Alison leaves with Beast who propositions her into joining his new organization: X-Factor.

Retrieved from "https://heykidscomics.fandom.com/wiki/Dazzler_Vol_1_42?oldid=1421125"
Community content is available under CC-BY-SA unless otherwise noted.