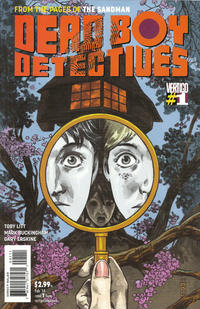 Before we leave this world, we need to settle our accounts. We have been cowards, Edwin, and that's not who we are.

As private detectives, Charles Rowland and Edwin Paine are usually tasked with finding lost children or cats. Tonight, though, they have bigger game - a major heist. That heist, however, is a sham, arranged by the National Gallery as part of another piece of performance art. The artist Maddy Surname is stealing Van Gogh's famous 'Sunflowers' and replacing it with a cover version by herself, callled "Bumflowers".

Unfortunately for Maddy, her daughter Crystal Palace is not eager to be a part of the scheme, and wishes her mother had a more normal profession. From the moment Crystal was born, Maddy was trying to outdo every other performance artist in the world. She went so far as to feign tattooing "Maddy Surname is a genius" onto her newborn daughter's forehead as a ravenous press lapped it up.

As the artists prepare to begin their staged robbery, a real one is already going on. Maddy and her family step out of their van, ready to accept the press's praise, when a helicopter hovering above drops a grenade down next to them. Only Crystal - and the Dead Boy Detectives - see it. Rather than sit by and watch, Charles intervenes, pushing Crystal out of the way. Edwin is not pleased, but since they bothered to save her, it seems prudent to turn their attention to the villains responsible. In a daring move, the two ghosts float up to the helicopter and cut loose the original Van Gogh from the net being dragged up inside. Successful, they tumble down with it, landing in the river - and while the painting is quite wet, they have thwarted a theft. But what of the girl?

Charles, ever the chivalrous and girl-crazy, insists that they see Crystal safely to the hospital. Crystal, though, is in bad shape, and Edwin worries that Charles' impulsive rescue might have caught Death's attention. As if in answer, Crystal's health begins to fade, and though Death has her eye on the girl, the time to take her has not yet come. Suddenly, the girl's eyes pop open, to see her parents gleefully reporting to the media that she has recovered. Woozily, Crystal demands to be changed to a new school - to St. Hilarion's - the same school to which Edwin Paine had gone, and the same school whose uniform she had seen when he and Charles saved her.

Charles insists that given the bullies that had killed them both at St. Hilarion's, it would be their duty to protect her there. Edwin, though, never wants to return to that place. They have no choice, though, if they are to do right by Crystal - and besides, the time might have come to deal with the bullies who gave them their deaths once and for all. However, there is still a worry about what they saw happen to Crystal the night before. Death may come for them soon. Ghosts cannot walk the earth forever. The two of them will need to settle their accounts, and putting it off is cowardly. So, off to St. Hilarion's they go.

Edwin and Charles' first days at St. Hilarion's were similar. They were dropped at the school first thing in the morning, where the headmaster greeted them warmly. Before long, though, the bullies of the school had tortured and indentured them. Now, they must give up their prized treehouse base (thanks, again, to Charles' tendency to fall for their female clients), and return to that place. This time, though, Charles insists that the case is a matter of honour, and not about the girl.

Crystal, meanwhile, has made a friend in her doctor, whom she confides in about her decision to go to St. Hilarion's. The doctor comments that starting at a new school can be scary. Crystal responds that she died for a minute the night before - so what could be scarier than that?

At St. Hilarion's, the headmaster struggles to select targets for the bullies to crush. While he has one, the bullies demanded two, and his aide suggests that he select the new girl.

Crystal returns home at last to find her parents gone. They have arranged a limo to take her to the news school, though. In the meantime, she wonders which tech she should take with her to the school - it will have to be something to help her in her ghost hunt.

Upon their return to the school, Edwin is pleased to discover that his old school hat is still there, impaled upon a fence-post at the gates. It is a brief comfort, though, as both will soon be returning to the place they were murdered. Unfortunately, they have arrived just in time to see Crystal receive her warm greeting from the headmaster, whom Edwin notes is the same headmaster he had - and he hasn't aged a day.

Retrieved from "https://heykidscomics.fandom.com/wiki/Dead_Boy_Detectives_Vol_2_1?oldid=1422267"
Community content is available under CC-BY-SA unless otherwise noted.