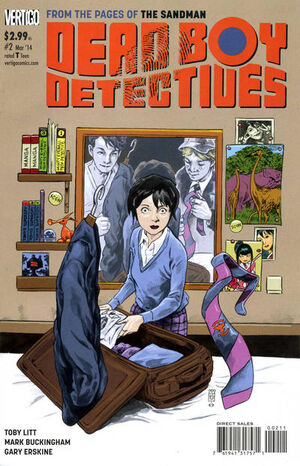 Crystal Palace has been enjoying showing her friend Momoko around the virtual world of Yonda; the world of a game she is fond of playing. She enjoys it so much, though, that she winds up late for her own introduction to her new fellow students at St. Hilarion's. Hurrying to catch up, she bursts onto the assembly stage to her great embarrassment, as all eyes turn to her, including those of Edwin Paine and Charles Rowland, who have come back to the school that killed them to make sure the same doesn't happen to Crystal. Embarrassed, she runs back to her room to hid in bed, and the boys follow.

They watch as a girl approaches Crystal's bed and explains that she is also a fan of Yonda, and hopes they can be friends. She introduces herself as Hana Watanabe. Crystal warns her away because she considers making friends a dangerous prospect. Her memories drift back to her eight birthday, when she and her friend Rosa had visited the Wynter Fayre. Many of the rides and activities were frightening, and Crystal had been excited by it. Rosa had not. Crystal pressured her to ride the ghost train with her. Rosa had been terrified, and Crystal brushed it off until she witnessed a real ghost rip Rosa's soul from her body before her eyes. Upon emerging, Rosa was sent to hospital, and nobody believed Crystal's story of what had really happened.

That night, as she and her intolerable roommates - Hana excepted - were preparing for bed, Headmaster Theodore interrupted to check on her, and fortunately, nothing had gone wrong yet. Edwin and Charles determined that she had not been tormented by the bullies as much as they worried she might, and decided to take the evening for a look around while Crystal slept. Edwin suggests that they return to the place that he had to watch Charles tortured to death; the attic. On that night, Death herself had allowed the boys to remain as ghosts, but neither boy knows why she did, or why she hasn't taken them yet.

Returning to the attic, they find that their remains are missing. Charles' corpse had been left in the middle of the floor, and Edwin's bones had rest for long years before that within a nearby chest. Both were now gone. Suddenly, though, they hear the voices of the bullies talking of the violence they intend to commit.

Crystal, meanwhile, is roused from her sleep by the feeling of a weight on her chest. It turns out to be one of her roommates, attempting to recreate the fake tattoo her mother had put on her as a child by drawing on her face with a permanent marker. Suddenly, Hana leaps to Crystal's defence, and all four girls end up in a tangled fight on Crystal's bed. Angrily, Mr. Nath warns them all to go back to bed immediately. Once everything has settled, Crystal realizes that she owes Hana an apology for being short with her at their first encounter. Hana takes her hand and affirms that they should stick together.

From their hiding spot in the old chest, the Dead Boy Detectives listen as the bullies discuss one of their favoured torture methods called the "french exchange." The upshot of it is that the victim is taken to the infirmary and placed into a permanent coma. Worriedly, Charles hopes that Crystal will not be targeted. As soon as the way is clear, they decide to investigate at the infirmary.

In the meantime, Crystal explains to Hana her plan to investigate the mysterious vision of a boy in a St. Hilarion's uniform she'd had while briefly comatose. That boy happens to have been Charles, as he was saving her life at the time. In any case, she plans to hack into the school's records, and enlists Hana to cause a distraction by pretending to need to go to the infirmary while Crystal hacks into the system. While doing so, though, she is interrupted by Headmaster Theodore, who makes no move to stop her from her activities, stepping into a back room filled with computers and monitors, drawing her suspicion.

It wasn't until later that evening that Hana returned from the infirmary. Upon her return, Crystal explained that she'd learned that both Edwin Paine and Charles Rowland disappeared from the school in 1916 and 1990 respectively. Not every trace of that disappearance was removed. Charles' body had been found in the attic and was buried in the graveyard of the school chapel in lot E7. Neither of his relatives came. Edwin Paine, meanwhile, simply disappeared without explanation, as far as the records show.

Soon, the boys are standing over Charles' grave, having searched for decades where it had only taken Crystal five minutes. Charles supposes that she might be able to help them find out more - like the identity of the hitherto unknown brother or sister his tombstone claims he had.

Retrieved from "https://heykidscomics.fandom.com/wiki/Dead_Boy_Detectives_Vol_2_2?oldid=1422268"
Community content is available under CC-BY-SA unless otherwise noted.