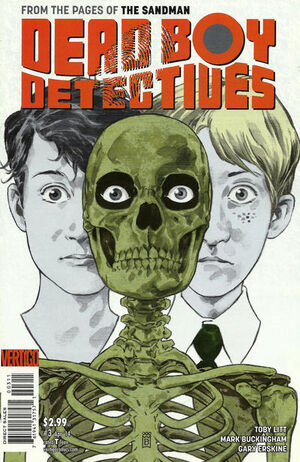 Just picture Crystal in your head. Think about her -- how good she is at investigating and everything. Now, do you want to just abandon her at St. Hilarion's?

Having just learned firstly that his body received a proper burial, and secondly that he has a brother or sister, Charles Rowland is quite pleased. Lying down over the old plot, he sinks down into the ground to investigate his own remains. Within his coffin, Charles remembers a time long ago when he'd been playing Hide-and-Seek and lay motionless under his father's suits for a long time, paralyzed by the fear of what being dead would be like. It turned out that death was not as straightforward as he'd imagined. This is certainly the case now, as he feels himself drawn into a surreal plane.

From her laptop, Crystal Palace explains to her friend Hana Watanabe that with the backdoor she installed in St. Hilarion's computer system, she can control all manner of other systems within the school. As interested as she is, Hana sheepishly remarks that the intimidating Mr. Nath had told her she must sleep in the infirmary that night. This worries Crystal, but she can do nothing to stop Nath from taking her friend away. Beyond her sight, Nath injects Hana with a syringe full of chemicals and warns that while she will be in the infirmary tonight, where she sleeps tomorrow will be her business.

Returned to Edwin Paine above ground, Charles explains the strange snowy landscape he'd seen down in his grave. Edwin remarks that he may know where his grave is, reminding of the skeleton they'd seen in the infirmary. Charles, though, is more interested in making sure Crystal is safe - after all, they'd come to protect her. Jealously, Edwin complains that Charles always puts girls ahead of him, and determines to go to the infirmary by himself, and Charles can do as he will.

Unfortunately, when Edwin enters the infirmary, and sees what horrors are befalling Hana there, he cries out aloud, alerting the bullies to his presence. Realizing he's been found out, Edwin runs, calling for Charles, but Cheeseman catches up to him, taunting him for coming back to the place of his murder.

Charles, meanwhile, thinks on Edwin's accusation, noting that there could be worse girls to fall in love with. Crystal, after Hana failed to meet up with her in their shared pastime of playing the video game Yonda, and failed herself to find the girl on the school's CCTV system, decided to investigate her friend's prior life. Hana had a real life, and Crystal worries that she will never see her again - something she couldn't bear after losing her friend Rosa years ago.

Meanwhile, Mr. Nath and the Headmaster prepare to have Hana's soul traded away so that her physical body can house a demon. Outside the door of the infirmary, Cheeseman prepares to drag Edwin back inside for further tortures. Fortunately, Charles arrives just in time to cause the distraction they need to squoosh away to their old Treehouse - which was unfortunately lost to Maggy and Libby Rosendale. Grimly, Edwin explains that St. Hilarion's is almost worse than Hell - a place he spent years investigating. It wasn't until 1990 that Charles freed him from a non-life of tortuous wandering. Charles tries to help his friend focus on Crystal, and how much they need to prevent her from being abandoned at St. Hilarion's like they were. Edwin admits that he is right, but points out that they'll have to reveal themselves to her, if they intend to actually do anything to help.

Meanwhile, in the infirmary, Headmaster Theodore welcomes the demon to its new home in Hanna's body and St. Hilarion's. Regarding him as a slave, the demon warns that it has a twin sister who needs to come through to this world as well. Worriedly, Theodore reminds that the deal is one exchange per year. That is the price for his continued longevity. Despite this, Mr. Nath suggests that he has another girl in mind to accomodate.

During her French class, Crystal's learning is interrupted by the Headmaster's announcement that there will be another "French Exchange," and everyone is eligible, including Crystal. For the rest of the day, she finds herself watched everywhere she goes, unknowingly guided by the Bullies to the infirmary. Worriedly, Charles and Edwin follow her in, hoping the bullies haven't settled on killing her yet. In the infirmary, Crystal meets with Hana, noting the difference but unaware that her friend's body had become host to a demon. Crystal therefore has no qualms about revealing that Charles Rowland had a sister named Clementine, who had never come to St. Hilarion's until after he died, because she thought his death's circumstances were suspicious. His body had been found with burn marks all over it, and Crystal has decided to sneak up to the attic to see if she can find clues about what happened.

Charles has a flash of memory revealing that his father had forbade his mother from singing the song "My Darling Clementine" ever again. While he was lost in this memory, Edwin had been looking through the eyes of his own skeleton, and learned that Hana's soul had been lost in that same snowy plane that Charles had been in earlier. In the meantime, though, the demon in her body had told Mr. Nath everything that Crystal had told her, and together they conspired to make Crystal host to a second demon.

Charles and Edwin return to Crystal, remaining at a distance because the three Bullies' ghosts stand guard. In order to get her out of their grasp, Charles suggests Edwin distract the Bullies while he escorts her away. Crystal, meanwhile has already sensed the Bullies' presence. Undeterred, she makes her way to the attic, and at the foot of the ladder leading up there, she is surprised to encounter Charles and Edwin, who introduce themselves at last, and warn her away from going in. Naturally, the Bullies abandon any stealth, and leap at her. Though Charles tells her to run, she can't, and soon she is caught and dragged up to the attic. The boys, meanwhile, are caught and dragged away by the Headmaster.

Retrieved from "https://heykidscomics.fandom.com/wiki/Dead_Boy_Detectives_Vol_2_3?oldid=1422269"
Community content is available under CC-BY-SA unless otherwise noted.