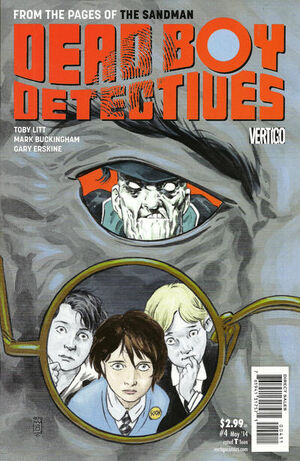 I have to admit, I felt this was the tightest spot we've ever been in. We don't usually try to take on raging demons from Hell. But, then, I had perhaps underestimated young Miss Crystal Palace.

The Dead Boy Detectives and their new friend Crystal Palace have been caught by the Headmaster and dragged back to face a demon who has taken control of Crystal's friend Hana Watanabe's body. Fortunately, thanks to an app on her phone, Crystal activates an intensely loud alarm that rings out through the entirety of St. Hilarion's. As is protocol, when a fire drill occurs, there will be a head-count, which requires that the Headmaster leave the ghosts an their friend to the bullies and the demon.

Hana, meanwhile, wanders the snowy Neitherlands, where she encounters a young woman named Rosa, who asks her for her full name.

Despite the need to maintain discretion, the demon within Hana's body insists that they not wait to sacrifice Crystal to it, causing an altercation between it and the Headmaster. In the meantime, Edwin, Charles and Crystal decide to make a break for it, crawling down the trap door from the attic into the main school. Unfortunately, Edwin and Charles are caught in the act by the bullies Cheeseman, Barrow, and Skinner, leaving Crystal to save herself. Still, with her new, ghostly friends in danger, she knows she has to do something for them.

Despite escaping from the bullies' grasp momentarily, both Charles and Edwin find themselves at the mouth of a chasm waiting to swallow them up and send them to Hell. Desperately, Charles leaps across the gap, and holds out his hand for Edwin. As he leans out dangerously over the gaping hole, he receives a helping hand from Crystal, who has returned for them both. After she helps both boys to safety, the bullies are enraged, and try to leap across after them. The first of them misses his mark, and drops down into Hell, prompting the other two to begin arguing over whose fault it is. Eagerly the Detectives and Crystal begin egging them on, and their argument becomes a tussle, causing both of them to fall into the hole after their companion.

Surprisingly, the bullies left their weapons behind, and given the important restriction that ghosts can only use ghost weapons, Charles and Edwin collect them, should they come in handy later. As they round the corner, though, they come face to face with the demon inside Hana. Bravely, the boys take control of Crystal's body, and as one, the three of them attack. The boys allow Crystal her body back when they realize that she needs to survive the ordeal, and they buy her the time she needs to escape with the weapons they stole.

Crystal uses those precious moments to do something quite unexpected: she sets the entire school on fire. Knowing that their cover will be blown otherwise, the demon returns to Hana's human form and makes a run for it, while Mr. Nath burns to death.

With their haunted school burning to the ground, the boys and Crystal decide to get away from there, pick-pocketing a phone to call a taxi. Unsure of where to go from there, the boys ask Crystal what she would like to do. Crystal has plans for them. She wants them to help her find Hana.

Retrieved from "https://heykidscomics.fandom.com/wiki/Dead_Boy_Detectives_Vol_2_4?oldid=1422270"
Community content is available under CC-BY-SA unless otherwise noted.