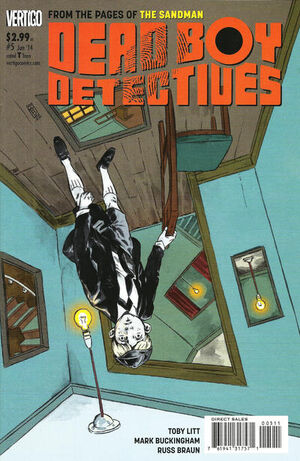 Ghosts. Tell me everything I need to know about ghosts.

Long ago, Edwin Paine had learned from his great aunt Araminta that the great secret to travelling between worlds is to follow a cat. Within minutes of sharing that secret, she had died - leaving behind a great many cats.

Now, Edwin's new friend Crystal Palace has invited he and Charles Rowland to stay with her in her empty mansion, living in the teahouse in the garden. As they make their way into the mansion, Edwin spots several cats entering a neighbouring house, and asks after the owner - an old lady named Marigold. Crystal, meanwhile, revealed to her parents that she had burnt her school to the ground, and found them altogether nonchalant about it. Afterward, she helped acquaint the Dead Boy Detectives with their new accommodations.

Charles then kept Crystal up for hours with questions about her investigations into his living relatives on the internet. Despite all the information she'd found, he was nervous about making contact - particularly given that he's long dead. Edwin, meanwhile, was more interested in taking on a new case to solve. The mystery, as far as Crystal is concerned, is just what the nature of ghosts like them is.

Charles agrees to share with her the seven rules and seven "buts" of being a ghost:

As Charles shares these rules, Edwin decides instead to follow the cats into Ms. Marigold's place. But as he approaches the old woman, he is distracted from distressed voices upstairs. He investigates, passing a cat along the way, and discovers the ghost of a young girl sitting upon her bed - which happens to be on the ceiling. She warns him not to come in, but it's too late, and he drops right through the door frame and onto the ceiling, unexpectedly. Surprised, the girl wonders if he has come to set her friend free. When Edwin recovers, he is surprised to see that the young girl has a gaping wound from her chest, and her friend happens to be trapped halfway through a large mirror on the other side of the room.

The girls introduce themselves as Lady Beatrix and her loyal maid Persephone, who had in 1888 been of a mind to visit the Dark Continent to meet Persephone's grandfather, who was dying of consumption at the time. Beatrix' parents had refused to let them travel, but her father had been to Africa and brought back with him a mysterious mirror that was said to be able to transport one to the Dark Continent in a twinkling. The girls had discovered that the legends about the mirror were indeed true, and they successfully visited Persephone's grandfather. When he died, though, the Shaman turned the people against them both, and they were forced to run back to the mirror. Upon passing through it, though, a tribesman's spear pierced through the mirror, killing Beatrix as it skewered her on the other side of the mirror. Likewise, the breaking of the mirror trapped Persephone halfway through it, and she became hopelessly stuck to this very day.

Persephone admits that she can feel something like cats licking her feet, and Edwin admits that this seems to be a case for the Dead Boy Detectives, promising to retrieve his partner. Unfortunately, if he leaves the room now, he'll end up falling ever skyward upon his exit from the house, and sqwooshing fails to provide any help. So, Edwin risks leaving the room at least, and upon his descent upward, he attempts once more to sqwoosh his way to the teahouse.

Meanwhile, Charles - who is already quite enamoured of Crystal - has had his breath taken away by the sight of her in her cosplay outfit when he hears Edwin's cries for help, desperately grabbing the windowsill for purchase, lest he float up into the sky and never come down again.

Retrieved from "https://heykidscomics.fandom.com/wiki/Dead_Boy_Detectives_Vol_2_5?oldid=1422271"
Community content is available under CC-BY-SA unless otherwise noted.