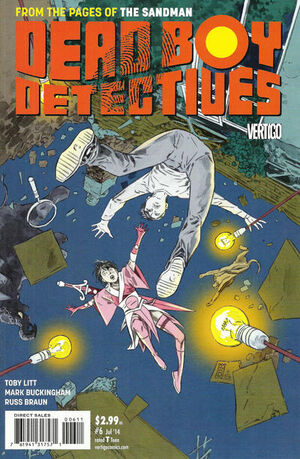 For something like this, we need to consult and expert in ghostly business.

It is a little known fact about cats that they can traverse the barriers between worlds. A certain philosopher, upon dying, soon learned that it was possible to piggy-back (or pussy-foot) his spirit within a cat, and follow them on those journeys. Since learning this, he has spent quite some time inside the Mirror Africana in Ms. Marigold's house, and appreciated her fish breakfasts.

Edwin Paine, meanwhile, has got himself unstuck from gravity, thanks to a cursed topsy-turvy room in Ms. Marigold's house, across the street from the home of his friend Crystal Palace. As Charles Rowland and Crystal attempt to drag him back down to earth, lest he float away, he details the plight of the spirits Lady Beatrix Quarles and her faithful friend Persephone, the latter of whom has been stuck halfway through the mysterious Mirror Africana for more than a century.

Reluctantly, Charles agrees that this is a case for the Dead Boy Detectives, and he and Crystal follow Edwin into the old house, forgetting that Crystal can't merely walk through things, and causing her a few injuries in the process. Lady Beatrix is quite pleased to see Edwin returned, and Edwin boldly begins to tug on Persephone's arms, trying to pull her free of the mirror. Charles warns that it might be putting her in danger to do so, and suggests they seek advice from an expert in ghostly business. After some deliberation, the boys settle on consulting Tragic Mick, leaving Crystal to contend with Beatrix and Persephone in the meantime - and their dictionary.

At their request, Crystal admits that her attire is what's called "cosplay" - and it is not typical for young ladies to dress so. While explaining just what cosplay is, she spots a cat walking right through the mirror. Persephone explains that cats are quite capable of doing so, and often tell her about the worlds that lie beyond it. When the mirror's glass was shattered, the space and time behind it were also fragmented, causing gravity in the room to become twisted. The grey philosopher cat happened to return through the mirror one day, and he could tell them all some very extraordinary facts, given all he's seen.

After an hour's walk, the boys arrive at Tragic Mick's Magic Tricks, and once they deliver the password, he allows them to enter at their peril. In exchange for the weapon they recovered from the bullies at St. Hilarion's, he confers with his associates and returns the information that they should try pushing instead of pulling. He also offers the cryptic suggestion that they should "follow a cat" - advice that Edwin's great aunt Araminta had once given him.

In the snowy spirit world, Hana Watanabe is offered a tour by the young woman Rosa, and refuses again, demanding only a way out. Rosa responds that there is no way out, besides being rescued. There is, however, a way in. If Hana were to go that way, she might never come back - nobody ever does.

After moving the mirror away from the wall, Charles and Edwin discover quickly that Persephone's other half is not waiting on the other side of it. Seeing Crystal playing with the grey cat, Charles wonders if they can get into the mirror with the cat's help. As they pass through the glass, they tell Persephone to have the girls pull her as soon as she feels them pushing.

As they travel into the mirror, Charles wonders if Edwin has developed feelings for either of the girls he discovered. Edwin admits that he has got a crush on Persephone - which is all the more reason to get her free with haste. When they discover her posterior, they begin pushing, and the ladies start pulling. The grey cat, though, warns that by trying to push her through, they'll ruin everything. With no results pushing, the boys decide to pull, and in doing so, they accidentally yank everyone into the mirror - including Crystal, who can't breathe in there. Hurriedly, Charles and Edwin call on the ghost roads to help them get their friends back to Ms. Marigold's house, all while the grey cat angrily bemoans having lost an entire universe to explore.

As they cross back into the room, the mirror's remains close around the grey cat, slicing it in two. Instead of dying, it becomes two cats - a white and a black. Besides that, everyone seems to be alright, though Charles worries that in protecting Crystal, he and Edwin have actually been putting her in further danger. After having sought freedom for so long, Persephone and Beatrix decide to go off and see the world while the boys return Crystal to her house. Upon their return, Crystal receives a message from Charles' long-lost sister, who has invited Crystal to visit her.

Retrieved from "https://heykidscomics.fandom.com/wiki/Dead_Boy_Detectives_Vol_2_6?oldid=1422272"
Community content is available under CC-BY-SA unless otherwise noted.