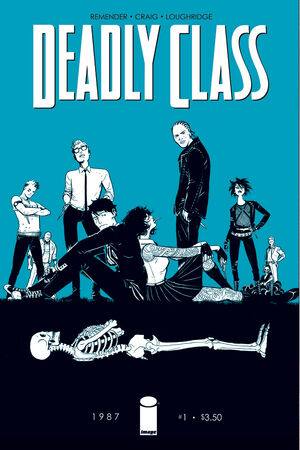 January in 1987 San Francisco, Marcus sits under a bridge begging for change. He's happy to no longer be in the Sunset Boy's Home but that's about it. He writes in his journal about being invisible to the city.

February 6, Marcus thinks about how today is his birthday as he begs for money. A man hands him a classified ad for jobs. Marcus secretly steals the mans wallet and fantasizes about going to the man's house to teach him a lesson, but decides not to.

March 13th, Marcus thinks about how horrible the winter is. He recalls being five years old and walking with his parents by the Golden Gate bridge. His father gave him the advice that life is a series of unique opportunities and it's their job to find the happiness in each one. Barbara Salinger was a suicidal schizophrenic that was released from a U.S. mental health facility when Reagan cut funding. She jumped from the bridge that day and landed on, and murdered, Mr. and Mrs. Arguello.

April 22nd, Marcus wakes up to a homeless man stealing his bag and shoes. When he sees the old man has infected feet and only wanted the shoes, he demands his book and bag back, but lets the man go with his shoes.

June 28th, Marcus thinks about how he might become the homeless guy he gave his shoes to. He feels like giving up.

August 7th, Marcus finds himself on a bridge ready to jump. A woman, far enough out of hearing distance who is watching him, mutters, "don't", and Marcus thinks back to his dad's advice of finding the happiness in every moment and doesn't jump.

November 1st, the Day of the Dead festival is occurring in the Mission District. Marcus recalls being brought to this once when he was five. When Marcus spots the girl from the bridge, he begins to chase her. A man bumps into him and tells him, "it's a sting, RUN!" Suddenly, two officers make their move on Marcus. One of the parade day of the dead workers blows smoke in the officer's face giving Marcus an opportunity to escape. The officer call in to dispatch that the target is being aided.

At a nearby arcade, people are playing old arcade games. As Marcus runs by the man playing the game stops to open the door to slam into the officers giving chase to Marcus. Marcus runs out the back alley and more cops are waiting for him. The woman from the bridge pulls up on a motorcycle and tells him to get on. As they speed off, more police officers give chase and one takes a shot winging Marcus on the back of the motorcycle. The woman tells him to grab hold as she leaps off the bike, through the window of the police car giving chase, and then jumps away as the police vehicle slams into a pole. Marcus freaks out and his motorcycle crashes. The police open fire on Marcus as he grabs his bag and dips out. Marcus finds it strange there was no order to freeze. When the cop corners him, he tells him he doesn't get a trial but only gets a bullet in the, and he's cut short as the woman from the bridge stabs the cop through the heart from behind with a katana. When Marcus attempts to question the woman, a bag is thrown over his head and he's taken to another location.

He hears voices of people arguing whether he was, "worth the time". When the hood is removed from his head, he sees the woman from the bridge, the man warning him to run, the guy who slammed the door on the cop, the woman from the parade who blew dust in the cop's face. They begin to exchange words but stop when Master Lin walks in. He offers Marcus to join their assassin's school as he's heard about Marcus' skills. While he thinks of leaving, the woman from the bridge convinces him to stay and offers to be his mentor.

Master Lin begins orientation by stating he will be killed if he reveals anything about the school. He explains there are no drugs, sex, unsanctioned killing, or disobedience from instructors. He reveal the entrance to the school and Marcus is shocked at the size.

Retrieved from "https://heykidscomics.fandom.com/wiki/Deadly_Class_Vol_1_1?oldid=1405522"
Community content is available under CC-BY-SA unless otherwise noted.