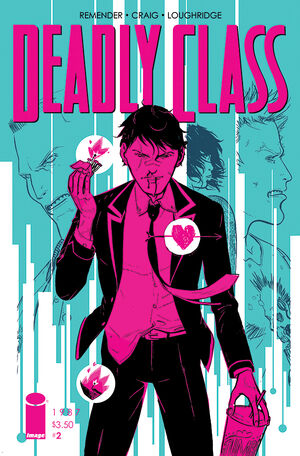 In 1986 at Sunset Boy's Home, Marcus tinkers with a device on his bed while his roommate makes lude comments while watching a dog show and touches himself in excitement.

In 1987 at King's Dominion Atelier of the Deadly Arts, Master Lin wishes Marcus good morning and warns him his arrival at the school has already spread throughout the school. He explains many other students are second, third, or forth grade legacy while Marcus is nameless. He explains his classmates will be harder on him for it.

Marcus walks through the school receiving scowls and looks from the other students. Various students begin scoping Marcus to try out for their clique.

At lunch, Marcus walks through to eat outside. He hears kids on top of the school. They recognize him and tell him they were told they should be afraid of him. He tells them his goal is to murder Ronald Reagan and they laugh as the bell goes off to head to the next class.

In the showers after class, Victor beats a fellow classmate for teasing him during the class. When Marcus steps in, Victor says he's not afraid even though Marcus has scars all over his body.

Shabnam thanks Marcus for helping him. A mysterious man hands a box to Marcus and dips. The box holds a dead animal skeleton. Shabnam walks him to his next class while telling him about all the cliques in the school.

Marcus attempts to thank Saya for agreeing to mentor him but she shrugs him off.[1]

In Oakland, a police officer follows up on a disturbance and hears some noises. He finds a man behind a goat who claims to not be hurting anyone. He pulls on a rope which drops a net of bricks on the officer's head. The man walks over to the officer and identifies him as Shawn Parcel, lead investigator in a sting in the mission district the previous week. The man tells the officer the rumor is that Marcus was the boy who torched the Sunset Boy's Home a year ago. He tells the officer he needs to know everything about Marcus due to personal reason.

Retrieved from "https://heykidscomics.fandom.com/wiki/Deadly_Class_Vol_1_2?oldid=766615"
Community content is available under CC-BY-SA unless otherwise noted.