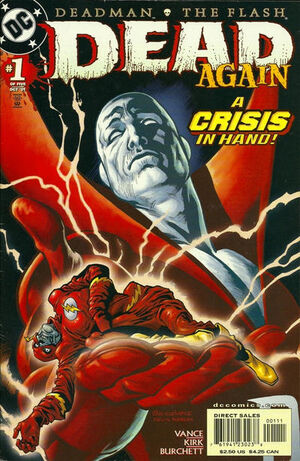 Flash was my quarry all along! And with him in my possession, I will soon gain power beyond your feeble imagining!

Appearing in "Dead Again Book One: The Quick and the Dead"Edit

Synopsis for "Dead Again Book One: The Quick and the Dead"Edit

Deadman wanders the streets during the chaos of Crisis on Infinite Earths, doing his part to save lives wherever he can. He is summoned by Rama Kushna and told he is needed for a mission in the Antimatter Universe. Deadman is then returned to where he was before. The Flash appears and as he disappears, Deadman dives after him, finding himself appearing in the antimatter universe. Deadman watches as the Flash sacrifices himself, destroying the Anti-Monitor's machine. Deadman escorts the Flash's soul toward a bright light, which is being guarded by Darius Caldera, who captures the Flash's spirit in a bid for power.

Retrieved from "https://heykidscomics.fandom.com/wiki/Deadman:_Dead_Again_Vol_1_1?oldid=1423985"
Community content is available under CC-BY-SA unless otherwise noted.