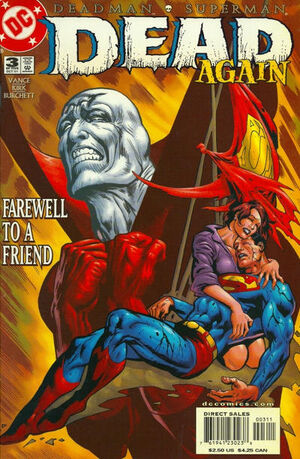 Since I can see you, not to mention my own corpse, I guess I'm dead.

Deadman is present for Superman's death at the hands of Doomsday. He escorts the man of steel to the bright light and Darius Caldera attempts to capture Superman's spirit in a Soul Cage. Deadman sacrifices himself and Caldera captures him instead. In one of Caldera's soul cages, Deadman learns that Caldera made a deal with the demon Neron to increase Caldera's power in return for capturing heroic souls for the demon. Caldera and Neron reveal their plan to Deadman. Caldera intends to inhabit the body of Superman, which will then be put to use by Neron.

Retrieved from "https://heykidscomics.fandom.com/wiki/Deadman:_Dead_Again_Vol_1_3?oldid=1423987"
Community content is available under CC-BY-SA unless otherwise noted.