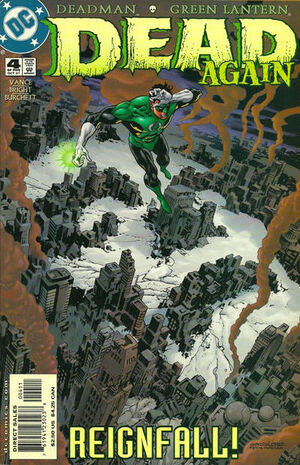 You may be Hell's answer to Dr. Seuss, but that doesn't make you invincible. I'll find a way to stop you!

With Neron's help, Darius Caldera takes over Superman's body, in return for his soul. Superman's body rejects Caldera and Neron claims Caldera's soul. Neron declares that the next soul on his list is that of Hal Jordan. Deadman escapes his Soul Cage and returns to Rama Kushna's dimension, where he learns that Superman is alive. Kushna sends Deadman to Engine City, where Hal Jordan and the JLA fight Mongul. Deadman takes over a goon's body and leaves Steel's hammer where Jordan can reach it in a critical moment of his fight with Mongul. As a result, Jordan does not die the way Neron intended. Instead he lives to see the destruction of Coast City, kill multiple Green Lanterns and becomes the villain Parallax.

Retrieved from "https://heykidscomics.fandom.com/wiki/Deadman:_Dead_Again_Vol_1_4?oldid=1505680"
Community content is available under CC-BY-SA unless otherwise noted.