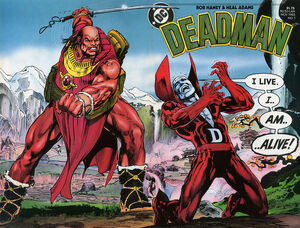 Deadman exits the Society of Assassins' headquarters and encounters Vashnu, to his great surprise. He inhabits Vashnu's body, reads a scroll in his hands, and learns of the existence of Nanda Parbat, a paradise on Earth. After saving Vashnu from a pair of the Sensei's killers, he trails them back inside the Society's headquarters and hears the Sensei order Willie Smith to board a plane and destroy Nanda Parbat with a laser weapon. Deadman accompanies Smith, inhabits the body of the plane's pilot, and, while they are over the part of the Himalayas which contains Nanda Parbat, engages him in battle. A pistol shot punctures a window, and Smith is sucked outside by the outrush. Deadman leaves the plane with the pilot, who turns back without harming Nanda Parbat. Deadman descends towards Nanda Parbat, which proves to be a Shangri-La of sorts, and, unexpectedly, materializes into human form, making a hard landing without his ghostly powers. He encounters Taj Ze, the massive, sword-wielding guardian of the realm, and Lotus, a beautiful Asian woman who shows him the cave in which Rama Kushna resides. Deadman wins a test of entrance with Taj Ze and enters, to confront his guardian spirit. Rama Kushna, in the cave, hears Deadman's plea and his demand to be allowed to return to the outside world, that he may help redress the imbalance of evil. Rama agrees, and Deadman is allowed to leave and begin his mission anew. At the exit to Nanda Parbat, Deadman is stopped by Lotus, who wishes to leave, but fears that her former nature, which was quite evil, will corrupt her again. She wishes to remain in Deadman's company, for safekeeping. But Deadman refuses, exiting and becoming a ghost again in the outside world. Lotus sobs behind him for a few seconds, until Willie Smith appears, yanks her past the boundary of Nanda Parbat, and watches as an evil smile fills her lovely face.

Appearing in "You Can't Hide from a Deadman"Edit

Synopsis for "You Can't Hide from a Deadman"Edit

While busting up a crime Batman is suddenly attacked by Deadman who possesses and attacks the Caped Crusader in the bodies of Robin, Commissioner Gordon and various people on the streets. Fighting off all these attacks, Batman manages to convince Deadman to stop, and soon learns that he was hypnotized into attacking Batman by the evil Sensei.

Eventually learning that the Sensei plans on destroying Nanda Parbat, Batman and Deadman travel there and stop the League of Assassins from destroying the land. After the battle, Batman leaves Deadman behind to try and figure out the mystery of why he gets physical form while in the realm of Namba Parbat.

Retrieved from "https://heykidscomics.fandom.com/wiki/Deadman_Vol_1_7?oldid=1422215"
Community content is available under CC-BY-SA unless otherwise noted.