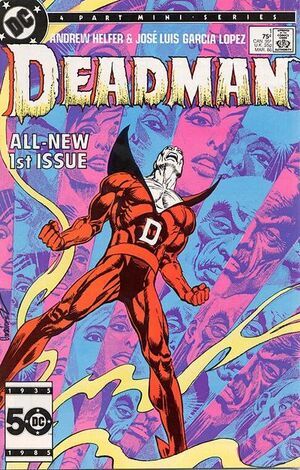 Appearing in "Return to Forever!"Edit

Synopsis for "Return to Forever!"Edit

Deadman possesses his brother, Cleveland, and writes a letter asking if he can continue living as him for one week. His brother agrees, and that evening the spirit of Boston Brand enters his brother's body. His first task is to let the Hill Circus crew know that Boston is with them in spirit, then he visits his grave site. There, the circus fakir, Vashnu, sneaks up and warns him about the dangers ahead and that he knows that Boston is "really" inhabiting his brother's body. During the following days, Boston works his brother's body to perfection, as he will soon be performing the famous "Deadman" aerial act. At the performance, Boston wants all the nets removed, and again, Vashnu warns him of the dangers if he follows through with the stunt. Determined, Boston climbs to the trapeze, swings out, and is promptly shot. He then spins down into a supernatural vortex where his brother confronts him, wondering what has happened. Realizing they're now both dead, Cleveland lashes out at his selfish brother. Suddenly, the spirit world is sucking Cleveland inside, and Boston understands a "balance" is being made. Shouting for the madness to stop, Boston confronts Rama Kushna, ruler over the universe's karma. She states that she seeks a pure soul, and that his is tainted due to their earlier encounters. Boston ignores her ramblings and heads into the void, believing he is about to save his brother. Instead, he hears his brother's final scream and Boston emerges from his grave site as a true "Deadman."

Retrieved from "https://heykidscomics.fandom.com/wiki/Deadman_Vol_2_1?oldid=1422216"
Community content is available under CC-BY-SA unless otherwise noted.