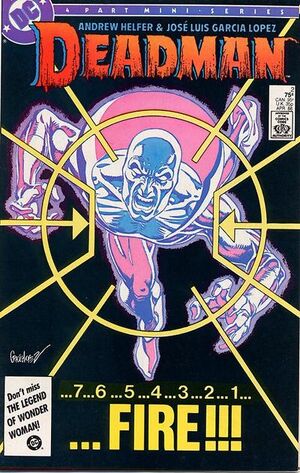 Appearing in "This Mortal Coil!"Edit

Synopsis for "This Mortal Coil!"Edit

After convincing his brother, Cleveland, that he wants to possess his body for a week, Boston Brand (as Cleveland) trains for his famous "Deadman" aerial act, but at the performance, Boston climbs up to the trapeze, swings out, and is promptly shot. Now with both brothers dead, they must confront Rama Kushna, ruler over the universe's karma, inside a supernatural vortex. She is seeking a pure soul, to balance the acts which have just been described. One soul must pass the vortex of peace. Boston ignores her ramblings and heads the other way into a mysterious void, believing he is about to save his brother. Instead, he hears his brother's final scream and Boston begins to emerge from his grave site as a true "Deadman." Meanwhile, while still in the vortex, Cleveland races towards his brother who is being pulled through the void. Cleveland rescues his brother and pulls him back into the vortex. He realizes he must sacrifice himself, as his brother is a better hero, and spiritual guide, for Rama Kushna. He walks into the light and is gone. All of this has happened in seconds in real time, and Boston is back at the circus, falling from the trapeze. Lying dead on the big top's floor is Cleveland, while the other performers gather around. Boston, back in the form of Deadman, hears laughter and sees Lotus, a resident of Nanda Parbat, with a gun. He tries to inhabit her body, but does not succeed. Suddenly, a midget clown (Maxwell Loomis) steps out of the shadows with a gun aimed at Lotus. They argue as if they know each other and he fires, killing her. Later, the police show up, cart out the dead and take a report. Deadman comes to realize his old nemesis Sensi is the one behind all the chaos and he vows to go after him. First, he visits Vashnu the fakir in his tent, and learns several secrets about Rama Kushna and the land of Nanda Parbat. Then, he pays his respects at his brother's grave and heads to Nanda Parbat to confront the Sensei. Maxwell Loomis and Vashnu have agreed to meet him there. When he arrives, he enters a temple where Spectra-Guns are aimed at him and he hears the orders of the Sensei to open fire. Again, Deadman is shot and falls.

Retrieved from "https://heykidscomics.fandom.com/wiki/Deadman_Vol_2_2?oldid=1422217"
Community content is available under CC-BY-SA unless otherwise noted.