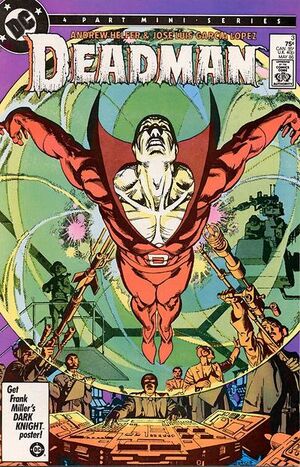 Whoa! I-I'm getting solid again! Only ghosts and super-heroes can fly... and in Nada Parbat... I'm neither!!

Appearing in "Breaking the Barrier"Edit

Synopsis for "Breaking the Barrier"Edit

When Deadman realizes his old nemesis, Sensei, was the one behind the death of his brother, Cleveland, he vows to go after him. When heading to Nanda Parbat, he enters a temple where Spectra-Guns are aimed at him and he hears the orders of the Sensei to open fire. Again, Deadman is shot, and is held captive inside a strange hovering "Ectoplasm-Bubble." Sensei reveals his true younger self, as a wandering spirit, by leaving his ancient body. He begins to lecture Deadman about the Spiritual Gulf and unrealized truths that the misguided Deadman can not see nor understand. His tale of revenge continues, as he tries to convince Deadman that by being Rama Kushna's pawn, he is serving the enemy, and they should join together to thwart their common foe. Deadman refuses, and is carted away to a lab (still in the bubble) for research and experiments. Several days later, Deadman is able to anger the lab man who is giving him the tests. The trick works, and the man rushes towards the bubbled Deadman and breaches the bubble's barrier. In an instant Deadman is free and searches for the Sensei. Meanwhile, two Hill Circus performers have finally arrived in Nanda Parbat, Vashnu the fakir and Maxwell Loomis the midget clown. They are trying to contact Rama Kushna. It seems the Sensei is also seeking Rama Kushna and is leading his army of Psi-Blasters towards her temple. While Deadman continues his search for the Sensei, he suddenly becomes solid, because he is has entered Nanda Parbat, where he's no longer a ghost, but an ordinary man. From behind, he is promptly head-butted by the back of a rifle, and falls. He wakes to find himself captured in a prison cell. His cellmate is the midget clown, Maxwell Loomis.

Retrieved from "https://heykidscomics.fandom.com/wiki/Deadman_Vol_2_3?oldid=1422218"
Community content is available under CC-BY-SA unless otherwise noted.