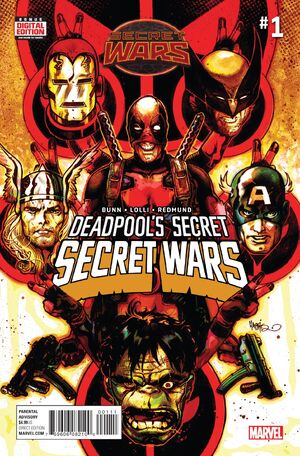 Back in 1984, all the big heroes were taken to space for a SECRET WAR – and here's what REALLY happened!

• NOT A SECRET WARS TIE-IN!

• Remember the original Secret Wars from 1984? And remember how Deadpool played a huge important role in it? Wait... you DON’T? Then you need to read this series immediately and be educated! From the team that brought you DEADPOOL KILLUSTRATED comes the most Secretest War of all!

• Plus: a bonus Deadpool Contest of Champions tale!

Retrieved from "https://heykidscomics.fandom.com/wiki/Deadpool%27s_Secret_Secret_Wars_Vol_1_1?oldid=1733992"
Community content is available under CC-BY-SA unless otherwise noted.