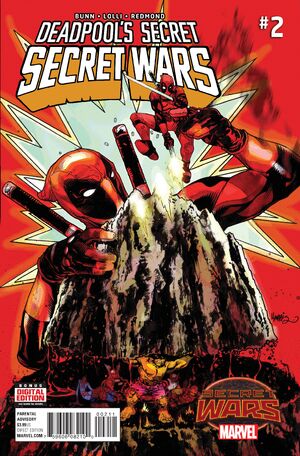 You! You're loving this I bet! You just love that you're the only one with a cool shield, don't you?! Well... you can take that Red, White, and Blue monstrosity of yours... and shove it straight up your --

• If a secret war happens on a secret planet in secret space, and no one hears about it...DID IT REALLY HAPPEN?!?!

• That’s what you’ll be asking about this series for years to come!

• And the answer is YES! Deadpool really DID mess with the original Secret Wars!

Retrieved from "https://heykidscomics.fandom.com/wiki/Deadpool%27s_Secret_Secret_Wars_Vol_1_2?oldid=1685938"
Community content is available under CC-BY-SA unless otherwise noted.