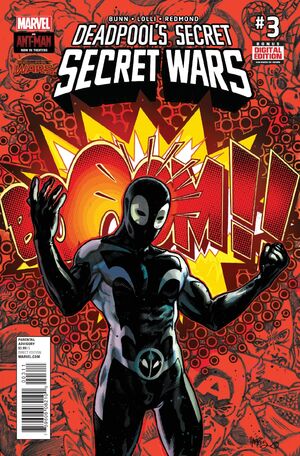 Yeah... well... I actually brought you here to maybe heal Mr. Fantastic or even the Hulk... some one with the smarts to think our way out of this... but I guess you're more concerned with your big dumb boy toy. Smoking hot... heroically posed... making the ultimate sacrifice... and I'm still chopped liver to the guy made out of metal.

• The war that’s so secret, the rest of the Marvel Universe doesn’t even remember it!

• Plus: our heroes stage a huge attack on the gluttonous GALACTUS!

Retrieved from "https://heykidscomics.fandom.com/wiki/Deadpool%27s_Secret_Secret_Wars_Vol_1_3?oldid=1733999"
Community content is available under CC-BY-SA unless otherwise noted.