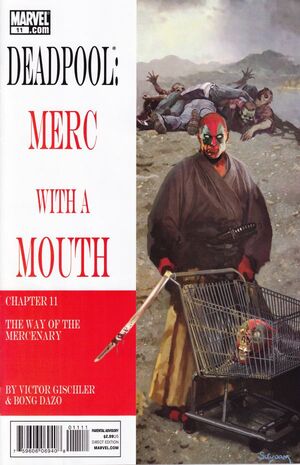 Appearing in "The Way of the Mercenary"Edit

Zombie Ice Man is HUNGRY! And Zombie Firebird is feeling peckish too. Mmmmmmm. A Slice of Dr. Betty sounds good ... with a side of Bill, Agent of A.I.M. You really think Deadpool is gonna let that happen? Cue gratuitous violence. Following Headpool's half-baked plan to get back to the "normal" universe, Deadpool and pals must first fight their way through the hungry of hungries. Which of Deadpool's compatriots gets zombie-fied? Tune in to find out. Same Deadpool-time. Same Deadpool channel.

Retrieved from "https://heykidscomics.fandom.com/wiki/Deadpool:_Merc_with_a_Mouth_Vol_1_11?oldid=1423033"
Community content is available under CC-BY-SA unless otherwise noted.