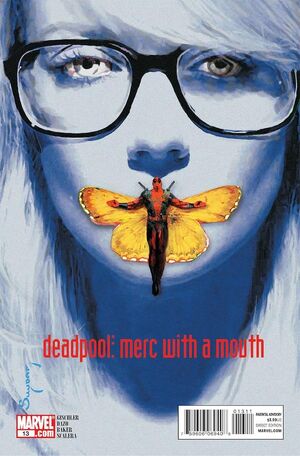 It's happening all over again exactly like before. Oh cruel fate, why doth thou mock me?! What? Too dramatic? I can pull it back a little.

The exciting and climactic ...uh...climax to Deadpool's adventures in the zombie dimension! Can Deadpool and pals find their way back through the Nexus of All Whatchacall to their home dimension? SEE our heroes battle zombie Deadpool before he lost his head. HEAR the hilarious wisecracks of Headpool! SMELL the pungent aroma of rotting zombie corpses. TASTE whatever snack you usually enjoy while reading stuff.

Retrieved from "https://heykidscomics.fandom.com/wiki/Deadpool:_Merc_with_a_Mouth_Vol_1_13?oldid=1423035"
Community content is available under CC-BY-SA unless otherwise noted.