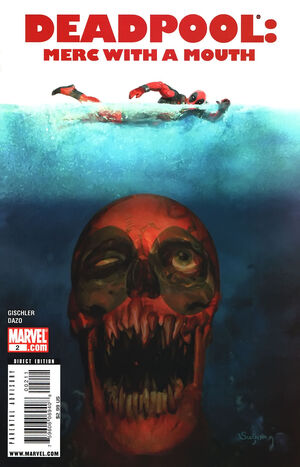 Ugh. My life has been non-stop gross since I've met you two.

Deadpool and Dr. Swanson wake up tied upside down above a pool of lava, with headhunders taking orders from Zombie Deadpool. Zombie Deadpool wants to have Deadpool's head cut off and his own head will use the body, but Deadpool manages to break free and take out the headhunters. Just as Deadpool is about to drop Zombie Deadpool's head into the lava, Dr. Swanson tells him that it's what she came for, so they take the head and make a run for it, barely managing to avoid being killed by dinosaurs, only to be captured by Hydra.

Retrieved from "https://heykidscomics.fandom.com/wiki/Deadpool:_Merc_with_a_Mouth_Vol_1_2?oldid=1423024"
Community content is available under CC-BY-SA unless otherwise noted.