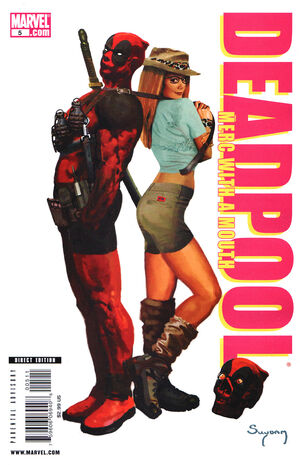 Say Jar Jar Binks is an abomination. Say it!

Ol' Wade and Dr. Betty turn Zombie Deadpool's head over to A.I.M., but after a change of clothes (but not a shower), Deadpool realizes that if they weaponize the head, everyone on Earth will die. The guys who make Fresca, the iCarly kids, Adam West, Paula Abdul, the guys who make all the add-ons for his favorite post-apocalypse game, everyone! So Wade rescues Head, the shapely Dr. Betty, and while A.I.M. and Hydra shoot it out, they make their escape and head to Florida along with Bill, Agent of A.I.M. to return Head to his own world. Happy!

Retrieved from "https://heykidscomics.fandom.com/wiki/Deadpool:_Merc_with_a_Mouth_Vol_1_5?oldid=1423027"
Community content is available under CC-BY-SA unless otherwise noted.