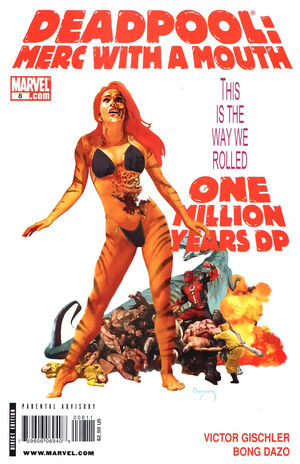 You don't want to eat me. I irritate the bowel.

Doctor Voodoo is talking to Deadpool about how he can help him get Headpool back to the zombieverse. He opens a portal for them and on the other side, Deadpool, Betty, and Bill are confronted by Zombie Shamrock, Zombie Tigra, and Zombie Moon Knight. A fight breaks out and Betty shoots Tigra as she jumps towards them. Moon Knight goes straight for Deadpool and mentions that he is an endless buffet since he just heals when a bite is taken out of him. Tigra gets back up and tries to attack Betty and Bill again. Both Betty and Bill empty their guns into Tigra, knocking her head off of her body. Betty proceeds to shoot her head, making it splatter everywhere. Deadpool cuts off Moon Knight's head and is attacked from behind by Shamrock. The two duke it out and Deadpool asks if death would be a sweet relief from the hunger. Shamrock says yes and Deadpool cuts her in half. The group runs off and tries to find a hiding spot. Back at the portal Doctor Voodoo opened, a group of A.I.M agents pursue Deadpool through the portal. Just as they get to the zombievers, the portal closes behind them. The group still hasn't found a safe place and as they discuss about coming up with a plan the Mecho-Marauder appears in a large robot to attack them. A missile shoots towards the Marauder and the group sees another group of people behind them, one a woman holding a rocket launcher. The other group of people reveal themselves as professors and Empire State University. The woman, Veronica Chase, explains that they have been working on a serum to cure the zombie virus. She leads them to a giant vault door and they all go inside. What they find is basically a safe haven for humans that the zombies haven't discovered.

Retrieved from "https://heykidscomics.fandom.com/wiki/Deadpool:_Merc_with_a_Mouth_Vol_1_8?oldid=1423030"
Community content is available under CC-BY-SA unless otherwise noted.