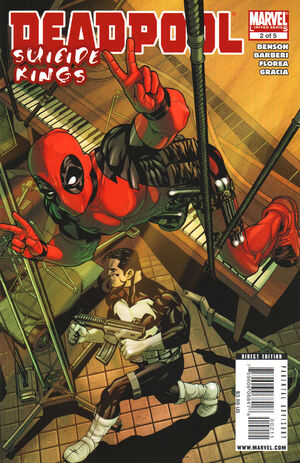 The Punisher has finally gotten a bead on Wade and tries to take him out. He uses various weapons stolen from villains, but Wade manages to get away. He finds himself at Outlaw's place and she helps him to recover. She leaves just before the Punisher attacks again, this time with a sword. He manages to hack off a couple of limbs before being knocked out by Daredevil.

Retrieved from "https://heykidscomics.fandom.com/wiki/Deadpool:_Suicide_Kings_Vol_1_2?oldid=1722194"
Community content is available under CC-BY-SA unless otherwise noted.