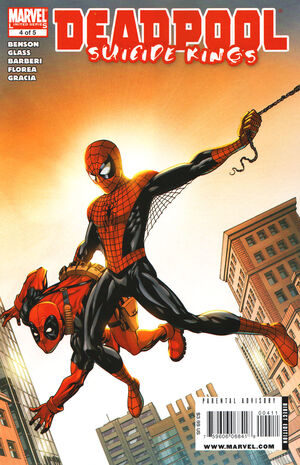 “SUICIDE KINGS,” PART 4: JOKER’S WILD Deadpool’s been framed. No, really! This time, Wade didn’t do it! To prove his innocence and find the person responsible, he’s got to avoid the Punisher (wants to kill him) and Spider-Man (wants to web him). Luckily for Wade, a certain Man Without Fear believes his story…

Retrieved from "https://heykidscomics.fandom.com/wiki/Deadpool:_Suicide_Kings_Vol_1_4?oldid=1639026"
Community content is available under CC-BY-SA unless otherwise noted.