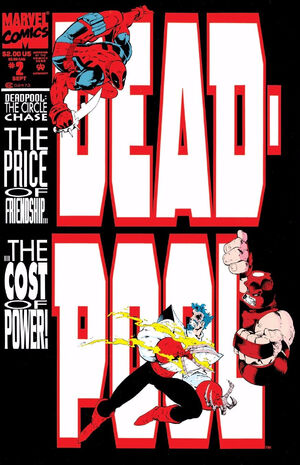 Did he say Jughead-naut? Is that someone who searches for the Archies?

Mr. Gezdbadah runs from mercenaries down the streets of Cairo. He is finally stopped and they ask him for his briefcase that he is carrying. He hands it to them and suddenly, Deadpool swoops in and grabs a hold of it. He tells them that he is taking the case. They shoot at him and he turns and returns fire. Mr. Gezdbadah tells Deadpool that the case holds a disc showing information about Tolliver's will. He says a man named Mr. Foley gave it to him and he also says that the prize at the end of this chase to get Tolliver's will is the most powerful weapon on the planet. Suddenly, Juggernaut busts down the wall and tries to attack Deadpool. He dodges and then is almost blasted by Black Tom Cassidy who has also shown up. Deadpool runs and drops the case. Black Tom goes to Mr. Gezdbadah and asks him about the will.

In New Jersey, Sluggo greets Mrs. Carlysle at her home. He asks her if she has heard from her daughter, Vanessa recently. She tells him no and he apologizes and then turns to leave. Then, a noose wraps around his neck and lifts him off the ground. Vanessa is on the roof of her mothers home and tells Sluggo that he is going to pay for what he did when he killed her friend Tina. He tells her that Deadpool has been looking for her. She then grabs him and throws him through her mother's window and tells her to call the police. She then takes off to go find Tolliver's will and be rich and happy.

Meanwhile, Courier meets with a man named Mr. Bashur. Bashur asks what his assignment is and Courier says that he has an order from the Executive Elite to take out a hit on Deadpool, Copycat, and Cable for the death of Nyko's brother Pico. The fee for doing this is information that will give Mr. Bashur a good advantage in finding Tolliver's will. Bashur tells Courier that he has a deal and that Deadpool had better say his prayers as he is first on the list.

In Cairo airport, Black Tom and Juggernaut board a plane to leave Cairo to go to Dublin. Deadpool calls Weasel from the airport and Weasel tells him the flight that Tom and Juggernaut are leaving on and then says it is leaving right then. Deadpool races out on the tarmac as the plane is about to fly. He jumps on the wheel and climbs in the plane as it starts its ascent. Black Tom is about to order a bloody Mary as Deadpool blasts through the plane's floor. He hits the briefcase in the overhead luggage and they all go after it. Deadpool then throws grenades at the planes door since Tom is standing in front of it and it blows open and sucks Tom out. Juggernaut goes jumping out after him. Deadpool closes the door and then gets the disc with all the information on it. He then turns to everyone and tells them to order drinks and that the plane is officially hijacked.

In Maine, Weapon X returns home. He gets off the boat and walks inside. He is greeted by Slayback. Slayback grabs his throat and tells him that he is looking for Deadpool. He says that he wants to know and he will let Kane live if he tells him. He also says that he has waited ten years to come "back from the dead" and he wants to see Deadpool dead and he wants to be the one to do it.

Retrieved from "https://heykidscomics.fandom.com/wiki/Deadpool:_The_Circle_Chase_Vol_1_2?oldid=1423706"
Community content is available under CC-BY-SA unless otherwise noted.