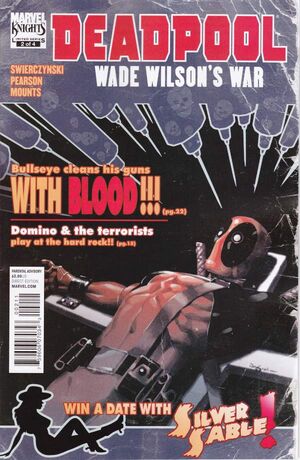 The true origin from Deadpool’s very talkative and crazy mouth continues to spill out, shedding new and bizarre turns. Did the clandestine military experiment that aimed to turn ordinary soldiers into super heroes do more than just that? Was Wilson a brave super-soldier fighting America’s secret wars, or just some pissed-off hick looking for a little payback? Or both? To Deadpool, the truth’s a funny thing…

Retrieved from "https://heykidscomics.fandom.com/wiki/Deadpool:_Wade_Wilson%27s_War_Vol_1_2?oldid=1743753"
Community content is available under CC-BY-SA unless otherwise noted.