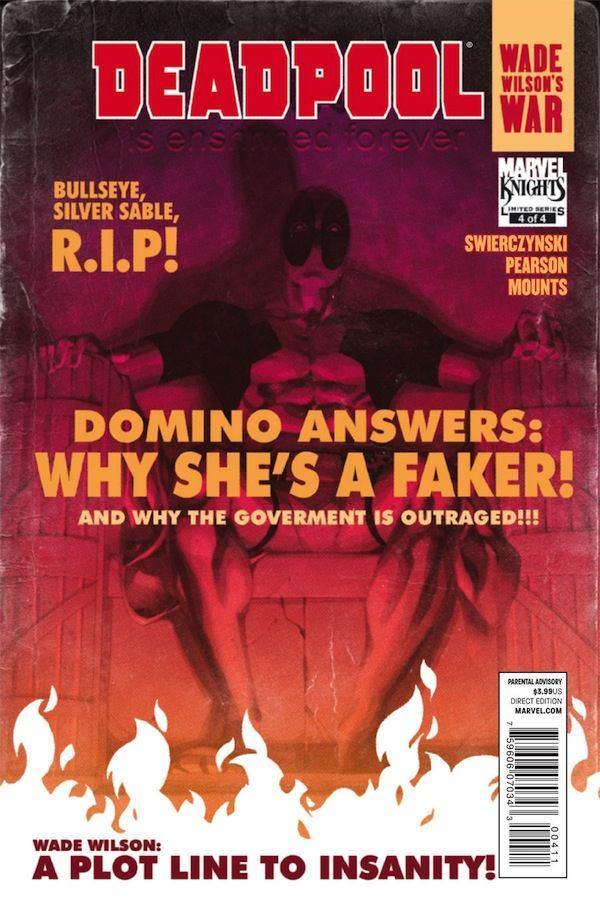 Appearing in "This Time, It's Personal"Edit

They say the greatest trick the Devil ever pulled was convincing the world he didn’t exist…Wait. That wasn’t “they.” It was Kevin Spacey, in The Usual Suspects. Anyway, Wade Wilson -- a.k.a. Deadpool -- seems to have the opposite problem. He’s having a damned hard time convincing the world that he does exist, that he’s been a brave soldier on the front lines of America’s secret wars for more than two decades. Now his former partner Domino is pointing a gun at Wilson’s head on live TV, telling a panel of Senators that he’s full of [REDACTED]. But when the truth finally does emerge, the walls will come tumbling down and everybody will be caught in the crossfire just the way Deadpool likes it. Don’t miss the conclusion of Duane (Cable) Swierczynski’s and artist Jason (Body Bags) Pearson’s full-tilt double-barrel assault on reality.

Retrieved from "https://heykidscomics.fandom.com/wiki/Deadpool:_Wade_Wilson%27s_War_Vol_1_4?oldid=1423712"
Community content is available under CC-BY-SA unless otherwise noted.