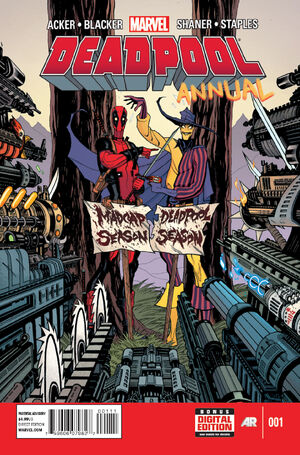 I miss that other guy. He'd have known just what to say.

Written by Ben Acker and Ben Blacker, the mad minds behind “The Thrilling Adventure Hour”!

Answering the most asked question since Deadpool’s new series began…

“Whatever Happened to the White Caption Boxes?”

Retrieved from "https://heykidscomics.fandom.com/wiki/Deadpool_Annual_Vol_3_1?oldid=1432410"
Community content is available under CC-BY-SA unless otherwise noted.