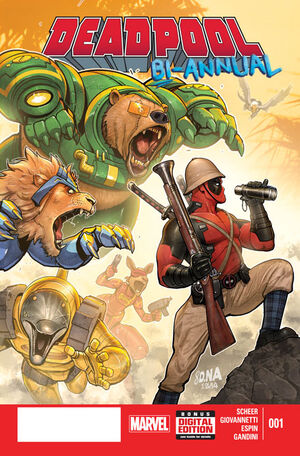 • When Deadpool is hired by WaterWorld to protect their theme park from activists, he has no idea he’s going to wind up face to snout with Brute Force—protectors of the environment! Look ‘em up! That’s right—they’re real!

• Written by star of The League and NTSF:SD:SUV Paul Scheer and Nick Giovannetti, this is one issue sure to make a splash*!

*This joke was not written by them.

Retrieved from "https://heykidscomics.fandom.com/wiki/Deadpool_Bi-Annual_Vol_1_1?oldid=1432412"
Community content is available under CC-BY-SA unless otherwise noted.