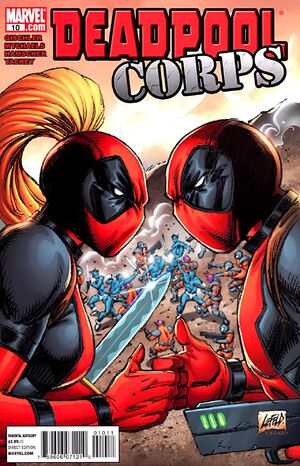 Appearing in "So You Want a Revolution: Part 4"Edit

“YOU SAY YOU WANT A REVOLUTION,” PART FOUR Overnight, the Krook home world has been turned into a modern society, much to the chagrin of the Krook King who champions their idyllic, primitive lifestyle. Now the king plots a rebellion to seize power back from his overly ambitious (but extremely hot) daughter Princes Teela. With Deadpool raising an army on one side, and Lady Deadpool rallying forces on the other, we could be heading for a confrontation which will doom an entire civilization!

Retrieved from "https://heykidscomics.fandom.com/wiki/Deadpool_Corps_Vol_1_10?oldid=1488915"
Community content is available under CC-BY-SA unless otherwise noted.