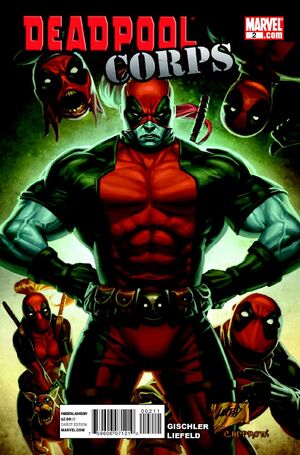 POOLPOCALYPSE NOW: DISRESPECT YOUR ELDERS Tapped by the Elders of the Universe, The Deadpool Corps – Deadpool, Headpool, Kidpool, Dogpool and Lady Deadpool –embark on the universe-spanning mission that only they can accomplish. If there's one thing Deadpool has learned, it's keep your friends close, your enemies closer, and your drinking buddies even closer than that. Why fight the Champion when he can be the Deadpool Corps's new best pal?

Deadpool is mistakenly shown talking in a normal white speech bubble instead of his characteristic yellow bubble in this comic.

Retrieved from "https://heykidscomics.fandom.com/wiki/Deadpool_Corps_Vol_1_2?oldid=1748841"
Community content is available under CC-BY-SA unless otherwise noted.