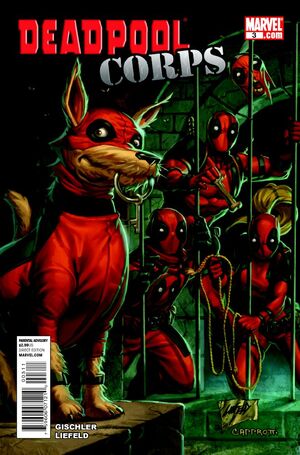 “WHAT'S THAT, DOGPOOL? WADE WILSON'S TRAPPED IN THE WELL?” No Deadpool Left Behind? Oops. With so many Deadpools to keep track of, I suppose we can understand that our pal Wade might accidentally leave one on the last planet where the Corps fueled up the Bea Arthur and stocked up on hot pockets. But the Corps has bigger worries, specifically an alien fleet of, well, aliens. Aliens with proton blasters and cluster-nukes, aliens who work for the bad guy cosmic uber-mind.

Retrieved from "https://heykidscomics.fandom.com/wiki/Deadpool_Corps_Vol_1_3?oldid=1748017"
Community content is available under CC-BY-SA unless otherwise noted.