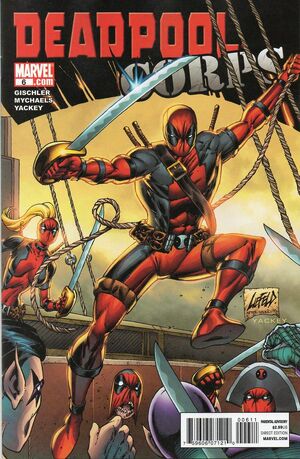 Appearing in "The Blue Buccaneer!"Edit

“MERCS AHOY!” Now that the Deadpool Corps has finished saving the multiverse, it's time to start earning a living again -- and in deep space, a good team of mercenaries can make a quick, if not honest, buck. When a local agricultural planet hires the Corps to fend off The Blue Buccaneer and his band of brigands, Wade and company are surprised to run into an old friend.

Retrieved from "https://heykidscomics.fandom.com/wiki/Deadpool_Corps_Vol_1_6?oldid=1748018"
Community content is available under CC-BY-SA unless otherwise noted.