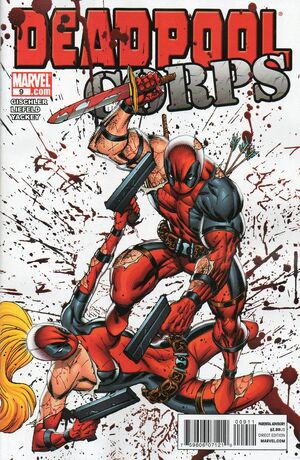 Appearing in "You Say You Want a Revolution: Part 3"Edit

“YOU SAY YOU WANT A REVOLUTION,” PART THREE Swanky new Corporate Deadpool continues his makeover of the Krook Home World, turning it into a modern resort planet. Unfortunately, the Omega Confederation hired The Deadpool Corps to put down the rebels, not diversify them, so they cook up a little surprise for the rogue merc. Meanwhile, not all of the Krook are happy with Deadpool's changes, and the Krook King starts a guerrilla war of his own, leading to a split within the Deadpool Corps itself. The key question burning in everyone's mind ... which side will Dogpool be on?

Retrieved from "https://heykidscomics.fandom.com/wiki/Deadpool_Corps_Vol_1_9?oldid=1423019"
Community content is available under CC-BY-SA unless otherwise noted.