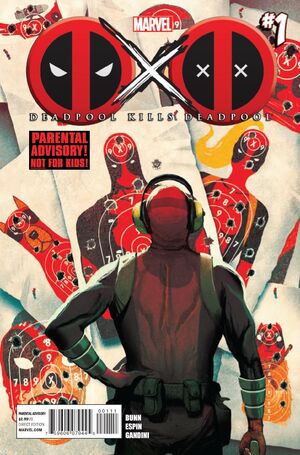 ... The crusade to oblierate existence has begun... And Deadpool is the progenitor of all things!

Leather-clad Deadpool puts Headpool in the microwave. Cut to Earth-616 where Deadpool is battling Ultimatum's giant robot. He's feeling a little out-classed but it's the Deadpool Corps to the rescue bearing a grim warning. Leather-clad Deadpool has found them and callously murders Dogpool and Golden Age Deadpool. Deadpool defeats him by using his own bodyslide technology against him. When Deadpool joins Lady and Kid Deadpool aboard their ship, a Watcher appears and informs him that Deadpools across the multiverse have been targeted for extinction as "Deadpool is the progenitor of all things."

• Deadpool sets his sites on the ultimate target...himself!

• Contains over 700% of your daily recommended Deadpool!

Retrieved from "https://heykidscomics.fandom.com/wiki/Deadpool_Kills_Deadpool_Vol_1_1?oldid=1536200"
Community content is available under CC-BY-SA unless otherwise noted.