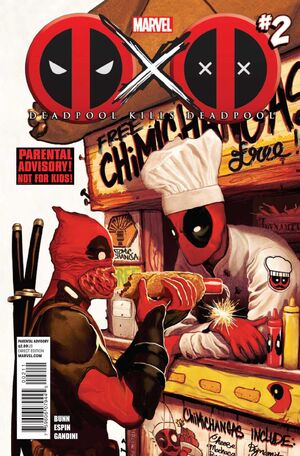 S'not fair. I managed to dodge the Avengers Arena bullet... Only to be taken out like this? Dogpool, old buddy. I'm right behind--

Hope you're not a Deadpool fan—he DIES in this issue!

Oh, but, uh…I hope you are a Deadpool fan, because, like…there are a lot of Deadpools in this issue. LOTS.

TIME TO THIN THE DEADPOOL HERD!

Retrieved from "https://heykidscomics.fandom.com/wiki/Deadpool_Kills_Deadpool_Vol_1_2?oldid=1423041"
Community content is available under CC-BY-SA unless otherwise noted.