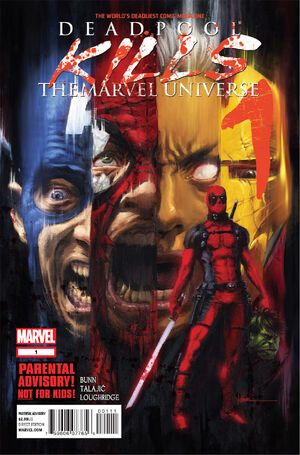 The story starts with a narration of Uatu the Watcher talking about the Marvels that surrounded this world, and how now every single Marvel is meeting its inevitable end.

Next, we see Susan Storm grieving over her dying husband Reed Richards, while surrounded by the remains of Ben Grimm's rocky body. Reed mentions with his last breath that he managed to keep their children safe in the Negative Zone from this menace. An explosion sounds and Susan becomes invisible only to find out that the perpetrator was none other than Deadpool who just crashed a ship crushing Johnny Storm and slitting his throat. The resulting blood splat reveals Susan's position to Deadpool but before he can attack her, Susan blows his head with a force field. However, Deadpool's healing factor rebuilds his head and he manages to stab Susan at the back, effectively killing the Fantastic Four.

In a flashback is revealed that Deadpool was committed into the Ravencroft Asylum by the X-Men in order to heal him from his insanity, but unbeknownst to them, his doctor was actually Psycho-Man who was brainwashing his patients into doing his bidding and was aiming to do the same with Deadpool by shutting down his inner voices. The plan backfired as his voices were replaced by a new one that encouraged him to kill everyone. Deadpool kills Psycho-Man by smashing his head as a stamp and later he escapes the asylum not before blowing it up.

Deadpool confronts Uatu once he manages to find him thanks to one of Reed's devices and even manages to kill him, before heading on with his massive killing spree.

Retrieved from "https://heykidscomics.fandom.com/wiki/Deadpool_Kills_the_Marvel_Universe_Vol_1_1?oldid=1423044"
Community content is available under CC-BY-SA unless otherwise noted.