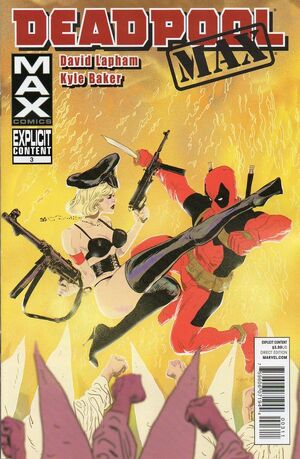 Appearing in "An Alternate History of Love in America"Edit

Synopsis for "An Alternate History of Love in America"Edit

While Bob distracts Helmet Zemo DP sneaks in close disguised as an orthodox Jew in order to take out his soldiers before killing Zemo.

The history of the 20th Century is the history of great leaps toward the fulfillment of a promise – a promise made by these United States to be a land where and all are created equal. For Baron Helmut Emmerich Von Zemo, though, the 20th Century was an unmitigated disaster that must be combated by EXTREME steps. And what should happen when Deadpool is tasked to take down out this hood-wearing warrior of hate? Feel the freeing power of the gun and the sword!

Retrieved from "https://heykidscomics.fandom.com/wiki/Deadpool_Max_Vol_1_3?oldid=1423055"
Community content is available under CC-BY-SA unless otherwise noted.