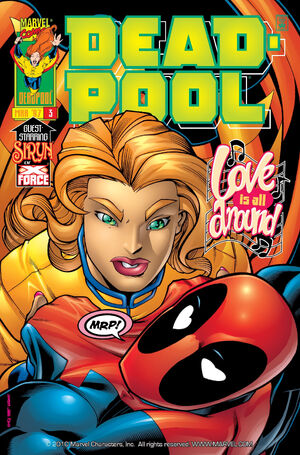 Appearing in "Dr. Strange Lives (Or, How I Learned Deadpool Was Da Bomb)"Edit

• Can even Doctor Strange help the M w/the M?

• This is the Deadpool series you will marry someday!

Dr. Strange references Arrested Development by responding to Michael's question of if their visit to the astral plane was a trick or not by saying "Illusion, Michael. Tricks are for prostitutes."

Retrieved from "https://heykidscomics.fandom.com/wiki/Deadpool_Vol_3_3?oldid=1642098"
Community content is available under CC-BY-SA unless otherwise noted.