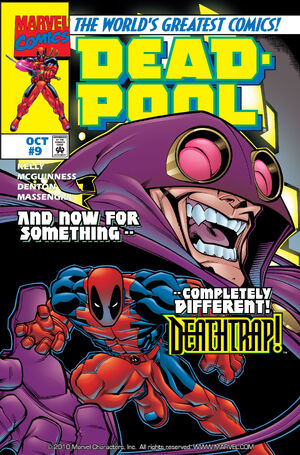 Appearing in "The Devil & The Deep Blue Sea"Edit

• Then he teams-up with your SUPERIOR Neighborhood SPIDER-MAN!

• I PROMISE HE KILLS ONE OF THOSE TWO!

Artie (the super-powered life-guard) might be a parody of Arthur Curry, the superhero Aquaman of DC Comics, being this issue a possible mockery of Aquaman, as Artie's power to breath underwater and communicate with sea life forms (the most characteristic abilities of Aquaman) are referred as the "dumbest superpower in the world". Aquaman is notoriously mocked in popular culture for his power of "talking to fish".

Retrieved from "https://heykidscomics.fandom.com/wiki/Deadpool_Vol_3_9?oldid=1421283"
Community content is available under CC-BY-SA unless otherwise noted.