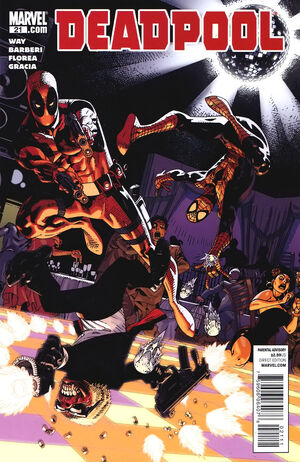 Why does Madcap have his clown panties in a bunch for you?

“IT’S NOT A TUMOR” STARTS NOW!

You can’t keep a good Madcap down! First, this massively oversized issue brings you the return of Deadpool’s greatest nemesis. He’s back (in the most horrific way possible) and he’s out for revenge! Then, say hello to SHAKESPOOL, THE MERCENARY OF VENICE as Deadpool goes Shakespeare for an all-new 60-page tale by Ian Doescher (William Shakespeare’s Star Wars series). Those old plays you were supposed to read in English class just got a lot more interesting. Don’t say we never taught you anything!

Appearing in "Much Ado About Deadpool"Edit

Synopsis for "Much Ado About Deadpool"Edit

Retrieved from "https://heykidscomics.fandom.com/wiki/Deadpool_Vol_4_21?oldid=1653348"
Community content is available under CC-BY-SA unless otherwise noted.