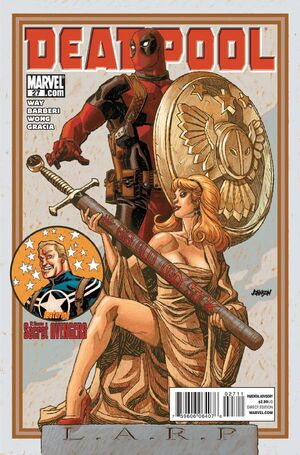 My mind races. Did Rogers use Deadpool as an torpedo? And he used a drop piece to make the shooting right? That's not the kind of chat you have with the head of S.H.I.E.L.D. without proof. I need to prove myself wrong. Cap can't have done what I think he did.

Appearing in "And Now For Something Completely Different"Edit

• Steve Rogers is Captain America, the bastion of all that is good.

• He’s the kind of paragon who Deadpool could really take a lesson from.

• I’m not caught up on his recent comics, but I can’t imagine anything could change that.

Retrieved from "https://heykidscomics.fandom.com/wiki/Deadpool_Vol_4_27?oldid=1653442"
Community content is available under CC-BY-SA unless otherwise noted.