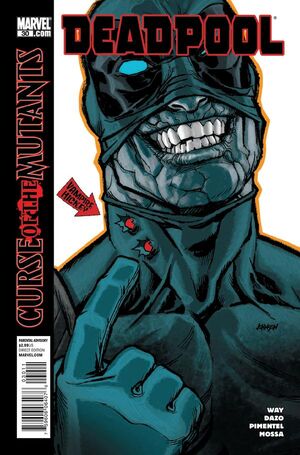 You've convinced me. I must have this delightful, colorful, humorous, and indestructible creature for my collection.

Appearing in "A Space Oddity"Edit

• Things aren’t great in Deadpool’s life recently, but he thinks he might know a solution… one found in the inky blackness of deepest, darkest outer space!

• Man, when Deadpool gets away from it all, he doesn’t fool around!

• This issue features ONE MASSIVE 80-PAGE STORY by Gerry Duggan and Mike Hawthorne taking Deadpool to the edge of the Marvel Cosmos and back! It’s practically an OGN! WE MUST BE OUT OF OUR MINDS!

Retrieved from "https://heykidscomics.fandom.com/wiki/Deadpool_Vol_4_30?oldid=1653445"
Community content is available under CC-BY-SA unless otherwise noted.